Like rotten fish or moldy bread, this piece of garbage keeps showing up time and time again. 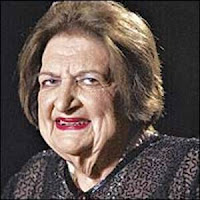 Former longtime White House correspondent Helen Thomas has become a columnist for a free weekly paper in a Washington suburb, months after a controversy forced her from her previous post.

Thomas's first column about Social Security appeared Thursday in the Falls Church News-Press, a northern Virginia publication with circulation of about 30,000.

Thomas, 90, covered 10 presidents at the White House starting in 1960 and also had worked for UPI. She resigned in June from her latest role as a Hearst News Service columnist after saying Israelis should get "out of Palestine."

News-Press owner and editor Nicholas Benton said in a statement printed in his paper that he was proud Thomas was "relaunching her career in my newspaper."

This is after her anti-Semitic rant to an anti-Arab bias workshop in Detroit.

And after her alma mater, Wayne State University, eliminated The Helen Thomas Spirit of Diversity in the Media Award.


"Wayne State encourages free speech and open dialogue, and respects diverse viewpoints," the school's statement said. "However, the university strongly condemns the anti-Semitic remarks made by Helen Thomas during a conference yesterday

It is a shame that this rag of a paper supports anti-Semitism.  And it is a shame that it is a free paper or a boycott could be arranged.  Perhaps if you live in the area you could contact their advertisers and quietly remind them that you don't patronize stores that support anti-Semitism, Hamas and terrorists.

Just a thought.
Posted by Findalis at 8:00 AM

There are some who say she should not have been fired, that like Juan Williams she was just expressing her personal opinion, free speech. It makes for a good debate I suppose.

Personally I can't stand Helen Thomas. Had she said something negative about the Palestinians she would have been crucified.