The Barrett Confirmation: It's Been a Good Week for Trump

President Trump may or may not be re-elected next week. Today, however, he achieved a great victory-not only for himself, but for the country. Amy Coney-Barrett, in spite of the childish efforts of the Democrats in the Senate to stop her, has been confirmed as a justice to the Supreme Court replacing the deceased Ruth Bader Ginsburg. The conservatives now have a 6-3 majority. (Maybe 5-1/2 if you consider John Roberts.) What President Trump has done in his first term is to place three conservatives on the Court. It will have a significant-and positive- effect for years to come. With the prospect of a looming Biden-Harris administration, the importance is magnified. Whatever the final verdict on Trump and his presidency-be it four years or eight years- his impact on the Supreme Court is historic.

The Democrats knew that they had no realistic way of stopping the nomination, but they played their childish games nonetheless and made asses of themselves. At one point, they stayed outside the chamber with only Chuck Schumer present, who argued that the proceedings could not go forward since there was no significant quorum (2 members of the minority being present). Lindsey Graham brushed that away, and the process continued. Then Schumer objected to Vice President Pence being present for the final Senate vote since somebody might catch the Covid virus from Pence, who was coming from the virus-infected White House, blah blah blah. In the end, Barrett passed 52-48.

Immediately, "The Squad", a coalition of four radical female dopes in the House of Representatives, (Ilhan Omar, Rashida Tlaib, Alexandria Ocasio-Cortez, and Ayanna Pressley) began clamoring to expand the court. Joe Biden, for his part, is now mumbling something about rotating courts, rotating justices, or anything that sounds halfway coherent.

Aside from that, as I have already noted, I think the debate went well for Trump. More people are now aware of who Hunter Biden is and what he is all about. More importantly, people are waking up to Joe Biden's involvement in his son's shady business deals with China and Ukraine thanks to the infamous laptop. Now the internet is filled not only with those compromising emails, but XXX-rated videos of Hunter playing hide the baloney with various bimbos while smoking what certainly appears to be crack. We shouldn't hold that against Old Joe, but the business stuff with China and Ukraine? And to think that Trump was impeached over a phone call in which he asked the president of Ukraine to investigate it all.

And don't think that 60 Minutes interview by Leslie Stahl hurt Trump. I viewed the version that Trump released. You don't see Stahl's face, and her voice is not very audible, but she acted outrageously. All she did was argue with the President. When Trump brought up what was done to him during and after the election and the Hunter Biden mess, she claimed that both were unverified. 60 Minutes can yell all they want about Trump ending the interview early, but Stahl's comportment was embarrassing.

On the foreign policy side, Trump also scored a victory this week with Sudan agreeing to normalize relations with Israel.

One other thing gives me encouragement. The crowds turning out not only to see the President speak, but just to demonstrate their support in other cities, are amazing. The polls, just as they did in 2016, are telling us that Trump trails, but something is happening that we don't see in the polls and certainly not in our disgraced media. Old Joe, meanwhile, if he even holds an event, can't draw much more than his Secret Service protection detail. Are we really going to elect this tired old man, who is drifting into senility, who is now mired in a serious scandal, and has as his running mate, a radical leftist with the charm of Hillary Clinton? I don't know, and I won't know until next week, but this past week has given me encouragement.

Joe and Hunter Biden: Where Is the News Media?

This week, in a truly shocking development, a CBS reporter named Bo Erickson actually asked Joe Biden to comment on the revelations surrounding a laptop purported to belong to his son, Hunter. Former Vice President Biden, who was boarding an airplane, was clearly agitated and refused to comment, calling it a "smear" and basically insulting the reporter.

That is about as close as the mainstream media has come to trying to find out the truth about the laptop and the alleged emails to and from Hunter Biden indicating that he was trading on his father's name in order to do business with China and Ukraine. Other than Fox News, the New York Post, which broke the story, and Mr Erickson, our media is trying its best to bury this story.

CNN continues to ignore the story while trying to deal with the latest in their own embarrassing stories with one of their talking heads, this time, legal analyst Jeffrey Toobin, who is "taking some time off". Over at MSNBC, Joy Reid used it to bring up a hit piece on President Trump's children while calling the Hunter Biden story, "fake".

Meanwhile, over on Capitol Hill, Adam Schiff (D-CA) is calling the story another Russian government disinformation piece designed to interfere in our election. Never mind that he has no basis for making such a charge and zero evidence to support it. In rebuttal, the FBI and Justice Department have gone on record this week stating that there is no "Russian connection" to this scandal.

Here is something else that is worth noting. Neither Biden nor his campaign has made any specific denial that the laptop in question (which was turned over to the FBI) belongs to Hunter Biden. Nor are they denying the emails that have been reported. The most that Joe Biden has said to this point that I am aware of is that it is a "smear" and that neither he nor his family has traded on the Biden name as has been alleged. Wouldn't you expect those type of specific denials from Joe Biden? And where is Hunter Biden these days? Where are the reporters camped out in front of his house? Does anyone even know where to look for him?

Of course, the Bidens know that there is a living witness to the story-the computer repair shop owner, who saw the material on the laptop and who apparently stands ready to corroborate everything. It has also been revealed this week that there is a receipt with Hunter Biden's signature on it. Joe Biden also knows that the laptop in question is in FBI custody and has been referred to the US Attorney's office in Delaware.

What we have not heard from Biden or his camp is a statement along the lines of: "the laptop in question does not belong to Hunter Biden", or, "the emails that have been reported are false". He might also throw in something like, "any reports that the laptop shows Hunter using crack cocaine and engaging in sex acts are false". None of that. Instead, they are attacking Rudy Giuliani for his role in the turning over of the material.

As far as the alleged meeting in 2015 in Washington with a Burisma official named Vadiym Pozharskyi, the Biden camp has stated that a review of then-Vice President Biden's schedule reflects no such meeting as being scheduled. That is hardly conclusive. Unscheduled meetings happen all the time with Washington officials.

Then there is Joe Biden's reference to the CBS reporter about the "smear". It's an ugly word with all sorts of negative connotations, but sometimes, a smear can be true.  For example, when people bring up Monica Lewinsky and her affair then-President Bill Clinton, that is a smear against Clinton-but it is a true smear. So Joe Biden calling the story a "smear" is not really a denial.

Of course, all this is going to be asked of Joe Biden in Thursday's debate, right? It's the elephant in the back of the room, and it should be the first question asked, right?  Don't get your hopes up. The debate is being moderated by pro-Biden Democrat Kristin Welker of NBC. In addition, the Commission on Presidential Debates intends to cut off the microphone of the candidate(s) when "appropriate". So if Welker says nothing about the Hunter Biden issue, and Trump tries to bring it up, we can now look forward to his microphone being cut off.

And then there are social media giants, Facebook and Twitter, trying to short-circuit any discussions about this story while they "fact-check" it.

And to cap it all off, should Biden win this election, once the new administration comes into office and a new attorney general sets up the new Justice Department, we can rest assured that any further investigation of Hunter Biden will quietly disappear-just as the on-going investigations into the corrupt practices of the Obama administration in trying to take Trump down before, during, and subsequent to the 2016 election- will also quietly disappear.

An old colleague of mine once said decades ago, "the only thing the people need to know is the ball scores". That thought may now be coming true. At least we will know who won the World Series.

Posted by Gary Fouse at 6:20 PM No comments:

Last night, the Muslim Public Affairs Council (MPAC) held a virtual town hall against bigotry (their words, not mine). The featured participant was Senator Bernie Sanders. So far, no problem although I would add that Sanders' presence shows MPAC's attachment to the far left. It is the remaining participants who raise eyebrows if your town hall is supposed to be against bigotry. Here is MPAC's Twitter announcement: 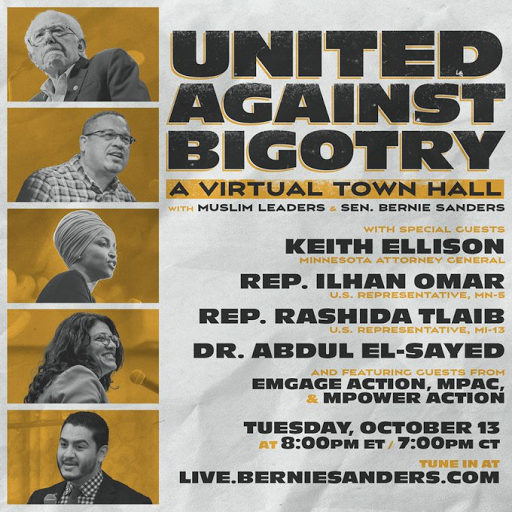 First of all, why would people like Keith Ellison, Ilhan Omar ("It's the Benjamins, Baby") and Rashida Tlaib be participating? All have had charges of anti-Semitism leveled against them. Ellison, who has a history of troubled relations with the Jewish community, has never satisfactorily explained his history of association with the Nation of Islam and its leader, Louis Farrakhan. Tlaib's open opposition to the Jewish state of Israel, critics charge, has often crossed the line into anti-Semitism.

As for Dr Abdul El-Sayed, I hope somebody asked him why he made such a fuss over an Israeli actress being chosen to play Cleopatra in a movie instead of an Egyptian actress. Just asking since the topic was supposed to be against bigotry.

Finally, I would ask Senator Sanders, who I have no reason to call a bigot, why he would appear with such a cast of characters.