Melissa Harris-Perry is one of MSNBC's lineup of uber-liberal talking heads whose main topic day after day is bashing Republicans. There is very little to no debate at MSNBC. Pravda has more balance than MSNBC. So now, UC Irvine is announcing that Harris-Perry will be appearing at our campus on November 9 to talk about why Black Lives Matter is important in politics.

Full disclosure. Melissa is a pretty lady in my book, but behind that charming smile, what comes out of her mouth is not so pretty.

Aside from her predictable rants against Republicans (which is a prerequisite for employment at MSNBC), Harris-Perry is also heavy into racial politics. Just this week, she made headlines for chastising a Republican guest for describing Paul  Ryan as a "hard worker". Apparently, that was a trigger or micro-aggression, as they say in academia, for Harris-Perry. According to her, hard work is working in the cotton fields-with its obvious racial connotation. Never mind that she has used the expression, "hard work" many times herself.

I am guessing that Harris-Perry will come to Irvine and do her best to divide her student audience by race. After all, that is de rigueur on college campuses today. She is certainly not going to criticize the Black Lives Matter movement, no matter how much violence against cops they have inspired, no matter how many lies they propagate. Case in point? On October 18, Harris-Perry hosted an unapologetic Monica Dennis, a BLM leader, on her TV show. After playing the infamous Minnesota State Fair BLM march where they chanted, "Pigs in a  blanket. Fry em like bacon", Harris-Perry switched to denouncing the GOP's "rabid rhetoric" as being worse. Her "example" of that was a very fair and factual statement by Ted Cruz.

And no, Melissa: It was not just one incident-a few seconds caught on videotape. She must have forgotten  the December 14, 2014 New York City march in which people were chanting, "What do we want? Dead cops. When do we want it? Now".

So will I go and listen to what she has to say? I am leaning against it. After all, I finish my day at UCI at 4 and she comes on at 7. What will I do for three hours? Besides, if I am correct, the q and a will be so structured that a select few sympathetic students will be chosen to lob up softball questions to the speaker. That is usually the case when a "VIP" comes to speak. I am reminded of when Obama religious adviser Eboo Patel came to speak at UC Irvine.

So I am guessing that hardball (no pun intended) questions will probably not be allowed. So what's the point? I do agree that priority should be given to students in these venues, but not to the total exclusion of someone else who might have a harder question.
Posted by Gary Fouse at 10:54 PM No comments: 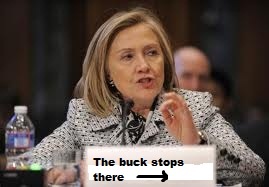 The mainstream media and liberal pundits are crowing about how the Republicans couldn't lay a glove on Hillary Clinton and how masterful she was during her testimony today. Well, maybe she didn't break down in tears, and maybe there was no Perry Mason moment when she broke down and confessed.  Maybe she kept her composure. But there was a smoking gun.

When the bodies of the four murdered Americans were returned to Andrews Air Force Base on September 14 and met by President Obama and Secretary of State Clinton, the latter told surviving family members that they were going to arrest and prosecute the man who made that video.

The same date, Sept 14, then White House press spokesman Jay Carney said, "We have no information to suggest it was a pre-planned attack."

Four days after the attack, Susan Rice went on those talk shows and insisted it was not a planned attack, rather a protest over the infamous video.

Yet, newly-discovered Clinton communications have provided the smoking gun behind the lies. That evening (September 12,) Hillary e-mailed her daughter that the Benghazi mission was under attack by al Qaeda-affiliated terrorists. The same evening, she told the president of Libya by phone that the terror group Ansar al Sharia was claiming credit. The next day, she told the prime minister of Egypt by phone that they "knew" that the attack was pre-planned and not a protest over a video.

Hillary Clinton lied to the American people-including personally and directly the families of the victims.

At the finale of the Watergate investigation, a tape recording that Richard Nixon had fought to keep secret revealed that he was sitting in the Oval Office telling his aides to have the CIA go to the FBI and call them off the investigation on the grounds that it was  a national security matter. That was the smoking gun that proved that Nixon was involved at the very least in the cover up. That led directly to his resignation.

There is still more to this story. Why lie? The obvious motive was that a terrorist attack at Benghazi went against the Obama/Clinton narrative that the American involvement in the overthrow of Moammar Qaddafi was a success story and that Libya was stabilized.  Not to mention that a presidential  election was looming. Not to mention the 600 requests for more security that had come from the Libyan mission-which were refused. Hillary knew those were going to come to light. Why do you think there was so much stonewalling from Clinton and the State Department to turn over the documents? Why did it take so long for it to be revealed that Clinton used a private email server to conduct diplomacy for four years leaving no paper trail in the DOS archives-as required by policy and law?

Hillary Clinton stands exposed as a liar. Does anybody care?


The below report was forwarded to me by Act for America in Calabasas (Ca). The writer, Michael Greer, attended a workshop devoted to Climate Change at UC Santa Barbara. If you need any further proof of the socialistic agenda of the climate change crowd, here it is.

I should note that I recognize one name in that report. That would be California State University Northridge math professor David Klein. So now we learn that Klein has other agendas besides using official CSU servers to spread his anti-Israel propaganda. (See below)


Indoctrination? You be the judge.

Once Again Netanyahu Shames the UN and Obama

Once again, Israeli prime minister Benjamin Netanyahu has shown himself to be a man among Lilliputians every time he goes to speak at the UN. This week was no exception. Speaking before that body of Third World corruptocrats and First World cowards, he pointed out to  them their utter silence in the face of Iran's threats to destroy Israel punctuated by a 44-second pause in his speech while the UN delegates-those who had not walked out-sat on their hands in silence. He told them that he was ready to negotiate with the Palestinians with no conditions. He pointed out to them that they had passed some 40 resolutions against his nation in the past year compared to just one against Syria! He showed them up for the small people they are.

Of course, he was met by silence. There was also silence from our Secretary of State John Kerry and our UN ambassador Samantha Power-because they weren't there. President Obama had pulled them out to attend a White House meeting-just the latest in a long series of snubs against Israel and its prime minister by this administration. The below report, with video of Netanyahu's speech is linked below by American Thinker.

And the Palestinian reaction to Netanyahu's willingness to negotiate? Another massacre. Two Israeli parents were ambushed in their car Thursday night and murdered by Palestinian gunmen before the terrified eyes of their four children, the oldest of whom was 9 years old. (I am surprised they didn't kill the children as well.)

And what is the response of the Palestinian people themselves in The West Bank and Gaza? Horror? Disgust? Statements that the killers do not represent them?

No. What we witness are celebrations and fireworks.

The Palestinians. The only thing they know is hatred. They only thing they know how to do is kill and destroy. Yet, they are the beknighted darlings of the UN and the international left. The UN now even gives them observer status and gives them a role in the International Criminal Court so they can bring human rights lawsuits against Israel. They are celebrated in Europe and the West even though they spit at us.

Those of you in the Middle East studies departments that infest our universities are too consumed with seeing that Israel is destroyed and becomes Palestine-from the river to the sea-with none of those hated Jews left. And those of you in other departments who have jumped onto this anti-Israeli bandwagon either because of your anti-Western, post-colonial philosophies or just because many of you are nothing more than 99 cent anti-capitalist Marxists, you share in the blame as well.

I have no sympathy with the Palestinian cause. They forfeited that way back in the late 1960s when I watched them skyjacking planes and murdering innocents in the name of their "cause".  In one form or another, they have never left terrorism. A Palestinian state would be nothing more than a base for terrorism and attacking Israel while having to survive on international handouts and welfare.

Of course Benjamin Netanyahu didn't say all that. I did.

Posted by Gary Fouse at 4:33 PM No comments: