You Can Run But Not Hide

Especially if your name is Anwar al-Awlaki.

Born in the United States to parents of Yemeni origins.  His parents returned to Yemen when he was 7.  He lived in Yemen for 11 years then returned to the United States to attend university.  He graduated Colorado State University with a B.S. in Civil Engineering and was the President of the University's Muslim Students Union.  He was a leader in al-Qaeda and took over leadership of the organization when Bin Ladin was killed.

al-Awlaki was the English voice of al-Qaeda.

The government of the Republic of Yemen officially announced the death, saying Awlaki was targeted and killed about 5 miles from the town of Khashef in the Province of Jawf.

The operation was launched earlier today at around 9:55 AM, local time. 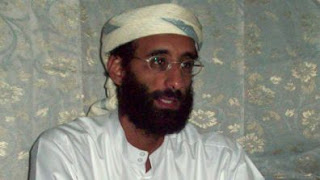 Yemeni security and tribal officials said an air strike thought to have been carried out by U.S. aircraft on Friday targeted a convoy of cars traveling in the eastern province of Marib but could not say whether al-Awlaki was in the convoy.

The 40-year-old al-Awlaki is believed to have inspired and even plotted or helped coordinate some of the recent attacks on the U.S., including the failed Christmas Day 2009 bombing of an airliner heading for Detroit, Michigan, and the also unsuccessful plot to send mail bombs on planes from Yemen to the United States in October.

The American-born son of Yemeni parents rose to prominence as Al-Qaeda's English-speaking voice and electronic messenger, spreading its terrorist credo via a blog, social media posts and email exchanges with such people as the U.S. Army major accused of a murderous shooting rampage at Fort Hood, Texas.

The Pakistani-American man who pleaded guilty to the May 2010 Times Square failed car bombing attempt told interrogators he was "inspired" by al-Awlaki after making contact over the Internet. Al-Awlaki was further believed to have had a hand in mail bombs addressed to Chicago-area synagogues, packages intercepted in Dubai and Europe in October 2010.

Yemen had in the past reported the deaths of Al-Qaeda leaders who were later found to be alive. Al-Awlaki was last reported to have been killed in December 2009.

Al-Awlaki is on a U.S. kill-or-capture list and is accused by Washington of inspiring several attacks in the United States.

The Yemeni officials spoke to The Associated Press on condition of anonymity because they were not authorized to share the information.

Yemen is the Arab world's most impoverished nation and has become a haven for Al-Qaeda militants.

Yemen has claimed this kill.  The US claims it was done by a drone.  All that matters is this scumbag is dead and getting his just reward.