I found this little ditty at Texas Fred's and decided to steal borrow it from him.  It is a very detailed way of describing a follower of Congressman Ron Paul. 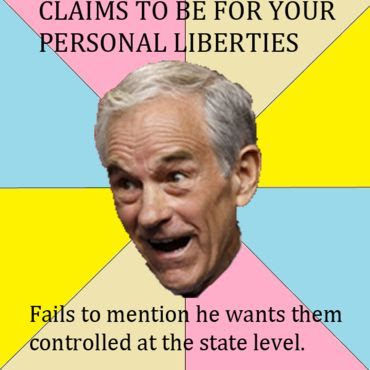 THEY CAN’T SHUT UP.

Likes to brag about helping to raise millions of dollars for Ron Paul not realizing he would never be elected and after the impossible race was over, he would just use it for hookers and blow.

Have a glazed-over “thousand yard stare”.

Is on the internet 25 hours a day (ZOMG PARADOX).

Is a virgin who couldn’t get laid in Bangkok.

Can’t vote due to inmate status, lack of citizenship, or being sixteen years old.

Hasn’t showered in two weeks and smells like fritos and old ass nuggets.

Is still in high school, thinks he knows more about politics and economics than every other expert on Earth.

Can get away with comments that would seem absurdly anti-American if they came from any other kind of ‘tard.

Brags about how he knew nothing about politics and economics until Ron Paul came along, as though that’s supposed to get you to take them more seriously.

Lives in Montana, Wyoming, New Hampshire, or outside of the USA, where they can be found in the basement of their parent’s house.

Always bitching about the property taxes he doesn’t pay on the house he doesn’t own, even while attending public schools and riding on public streets.

Has at least 100 sockpuppet accounts on YouTube. Posts “9/11 was an inside job! VOTE RON PAUL!!11″ on random YouTube videos that have nothing to do with politics.

Believes that Digg is part of an anti-Paul conspiracy.

Cant get through reviewing the toaster he bought on amazon.com without mentioning VOTE RON PAUL 2012 over 9000 times.

Spends hours creating “Ron Paul Revolution” with the “evol” reversed and emphasized to spell out “Evolution” but fails to remember the senile coot doesn’t even believe in it.

Steals credit cards to contribute the monies to the campaign. Mistakenly assumes that you care about how much money Ron Paul has raised.

Will always refer to Ron Paul as “Dr. Ron Paul” (as if holding a medical degree somehow qualifies you to be the leader of the free world).

Lives in Europe, having no voting rights in the United States whatsoever, and only supports Ron Paul because they want the USA to GTFO of the rest of the world.

Claims to have read the Constitution but actually hasn’t.

Becomes emotionally distressed when someone says something remotely bad about “Dr. Paul”, resulting in incoherent shrieking about Neocons, liberals, the NWO, and the Federal Reserve.

Spouts conspiracy theories about just about everything.

Accuses the mainstream media of fixing polls because they’re “afraid of a Ron Paul presidency”.

Will accuse any detractor of hating the Constitution and hating liberty.

Finishes every statement with the words *IN LIBERTY*, ie: Can I get a Diet Coke? IN LIBERTY!

Believes that Ron Paul has a direct line that connects to the Founding Fathers, allowing him to understand the Constitution better than the Supreme Court.

Listens to the Hal Turner Show. Their best reason to vote for him: He hates Blacks.

Is actually a Ukrainian spambot.

Has a massive persecution complex and thus is a major attention whore.

Constantly mentions that Ron Paul has delivered over 9000 babies, as if pulling babies out of some lady’s vagina earns you the right to be president.

Is an automatic expert on every issue because of their support for “Dr. Paul”.

How do you know you’re in a room with a Paultard? He’ll tell you. Repeatedly.

Fail to realize that out in Realworldistan, no one gives a rat’s ass about their messiah.

Thought that by spending every free second of their day-to-day routine trolling Yahoo! Answers, Ron Paul’s fanbase would go from 3% of the populace to the 49% necessary to steal an election.

Refuses to acknowledge that much like how Ron Paul believes that 95% of Blacks are “criminals,” 95% of America does not know or care about who he is. ZOMG DID YOU HEAR OBAMA IS Black?????

Is easily trolled by talk-radio hosts and reduced to batshit crazy screaming like this loon.

Read the Protocols of the Elders of Zion over 9000 times, and tells you about it.

Watched Zeitgeist – The Movie, Loose Change and The Matrix because these movies speak the Word of Truth, and makes sure that YOU know!

When you meet a Paultard do not distract them with facts, their minds cannot handle them.  Nor can they handle the fact that Ron Paul is not the Messiah, not G-d, never has introduced a bill in Congress and gets re-elected due to the fact the voters in his district are inbred morons.

I happen to know that the Elder of Ziyon has not yet written the Protocols and you can ask him directly here.  (I have a feeling the Elder is going to kill me for this.)

Remember to treat a Paultard with the contempt he or she deserves.  After all they aren't really sane people.  In many ways they remind me of Ross Perot supporters.  Those idiots gave us 2 terms of Bill Clinton. 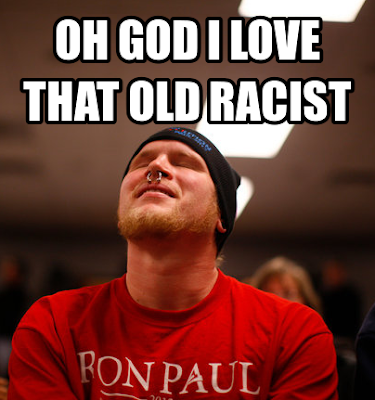 Hi there Katie. Just dropped by on this rainy day to say Hi. I'm still having trouble opening and scrolling on your page.

It's a Google/Blogger problem. I do hope they fix it.

Thank you for reposting! Yep, ALL Google Blogs are really hard to load today.. I thought it was just me, guess not... .