A New Definition Of Courage

Since the March 11th earthquake and tsunami, the world has witnessed the remarkable strength and fortitude of the Japanese people. While other nations experience looting, rioting, and the full spectrum of criminal behavior whenever a disaster (man-made or natural) occurs. Not so with the nation of Japan.  Politeness, sharing and the concept of community embodies this nation's soul.  No where in Japan this is unquestionable than with the 50 men who have volunteered to stay at the doomed nuclear facility at the Fukushima Nuclear Power Plant.


Workers at the disaster-stricken Fukushima nuclear plant in Japan say they expect to die from radiation sickness as a result of their efforts to bring the reactors under control, the mother of one of the men tells Fox News.

The so-called Fukushima 50, the team of brave plant workers struggling to prevent a meltdown to four reactors critically damaged by the March 11 earthquake and tsunami, are being repeatedly exposed to dangerously high radioactive levels as they attempt to bring vital cooling systems back online.

Speaking tearfully through an interpreter by phone, the mother of a 32-year-old worker said: “My son and his colleagues have discussed it at length and they have committed themselves to die if necessary to save the nation.

“He told me they have accepted they will all probably die from radiation sickness in the short term or cancer in the long-term.”

The woman spoke to Fox News on the condition of anonymity because, she said, plant workers had been asked by management not to communicate with the media or share details with family members in order to minimize public panic.

She could not confirm if her son or other workers were already suffering from radiation sickness. But she added: “They have concluded between themselves that it is inevitable some of them may die within weeks or months. They know it is impossible for them not to have been exposed to lethal doses of radiation.”

The plant operator, Tokyo Electric Power Co. (or TEPCO), says medical teams conduct regular testing on the restoration workers for signs of contamination-related illness. It claims there have been no further cases following the three workers who were treated last week after coming into direct contact with radioactive water. There are no reports of new members of the Fukushima 50 developing radiation sickness.

Although two suffered radiation burns to their legs and ankles and absorbed radiation internally, they have since been released from the hospital and are regularly being checked for signs of any deterioration in their condition, says TEPCO.

The company has pledged to improve the tough conditions for workers who stay on the site due to the short turnaround of shifts on safety grounds.

Some restorers directly tackling the problems with the fuel rod containment chambers are limited to 15 minutes at a time inside the reactor buildings or working near highly radioactive substances, including traces of plutonium that have appeared at numerous locations within the plant complex.

Living conditions for the hundreds of employees staying within the plant’s perimeter to support the restoration efforts are also equally as hazardous, say the authorities.

Banri Kaieda, the interior minister who also acts as a deputy head of the nuclear disaster task force jointly set up by the government and TEPCO, said 500 to 600 people were at one point lodging in a building within the complex. He told a media conference it was “not a situation in which minimum sleep and food could be ensured.”

Japan’s Nuclear and Industrial Safety Agency says that workers were only eating two basic meals of crackers and dried rice a day, and sleeping in conference rooms and hallways in the building.

According to Kaieda, not all of the workers had apparently been provided with lead sheeting to shield themselves from potentially radiation-contaminated floors while sleeping.

“My son has been sleeping on a desk because he is afraid to lie on the floor. But they say high radioactivity is everywhere and I think this will not save him,” said the mother of the worker who spoke to Fox News.

True Bravery knows no skin color, no one faith, no one nation.  It comes from the depths of one's soul, stirred by conviction and nourished by one's conscience.


To All People Around the World,

Please send your prayers of love and gratitude to water at the nuclear plants in Fukushima, Japan.

By the massive earthquakes of Magnitude 9 and surreal massive tsunamis, more than 10,000 people are still missing. It has been 16 days already since the disaster happened. What makes it worse is that water at the reactors of Fukushima Nuclear Plants started to leak, and it's contaminating the ocean, air and water molecules of the surrounding areas.

Human wisdom has not been able to do much to solve the problem, but we are only trying to cool down the anger of radioactive materials in the reactors by discharging water to them.

Is there really nothing else to do?

I think there is. During over twenty year research of hado measuring and water crystal photographic technology, I have been witnessing that water can turn positive when it receives pure vibration of human prayer no matter how far away it is.

The energy formula of Albert Einstein, E=MC2 really means that Energy = number of people and the square of people's consciousness.

Now is the time to understand the true meaning. Let us all join the prayer ceremony as fellow citizens of the planet earth.

I would like to ask all people, not just in Japan, but all around the world to please help us to find a way out the crisis of this planet

The Fukushima 50 will all certainly die of Radiation Sickness from their heroic efforts. Let us all pray that their sacrifice will not be in vain.  That they will be able to do the impossible, and stop this disaster from destroying a good chunk of Northern Japan. 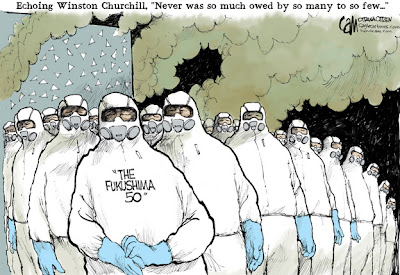 so inspirational how some people recover while others whine and moan for centuries Katie!