The Right To Vote! 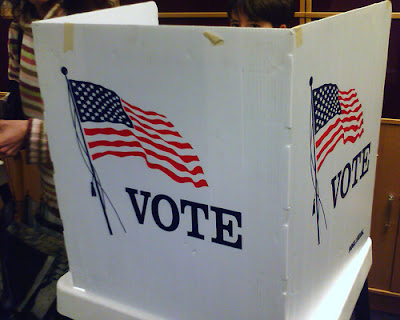 The right to vote is granted to all citizens of the United States regardless of race, creed, color, sex, income, or sexual orientation.  If you are a citizen over the age of 18, who hasn't committed a felony, you have the right to vote.

That is soon to change.  For now there is a movement by the Progressives Moonbats to allow legal non-citizens to vote.


Like his neighbors, Claude Rwaganje pays taxes on his income and taxes on his cars. His children have gone to Portland's public schools. He's interested in the workings of Maine's largest city, which he has called home for 13 years.

There's one vital difference, though: Rwaganje isn't a U.S. citizen and isn't allowed to vote on those taxes or on school issues. That may soon change.

Portland residents will vote Nov. 2 on a proposal to give legal residents who are not U.S. citizens the right to vote in local elections, joining places like San Francisco and Chicago that have already loosened the rules or are considering it.

Noncitizens hold down jobs, pay taxes, own businesses, volunteer in the community and serve in the military, and it's only fair they be allowed to vote, Rwaganje said.

"We have immigrants who are playing key roles in different issues of this country, but they don't get the right to vote," said Rwaganje, 40, who moved to the U.S. because of political strife in his native Congo and runs a nonprofit that offers financial advice to immigrants.

Opponents of the measure say immigrants already have an avenue to cast ballots -- by becoming citizens. Allowing noncitizens to vote dilutes the meaning of citizenship, they say, adding that it could lead to fraud and unfairly sway elections.

In San Francisco, a ballot question Nov. 2 will ask voters whether they want to allow noncitizens to vote in school board elections if they are the parents, legal guardians or caregivers of children in the school system.

Noncitizens are allowed to vote in school board elections in Chicago and in municipal elections in half a dozen towns in Maryland, said Ron Hayduk, a professor at the City University of New York
and author of "Democracy for All: Restoring Immigrant Voting Rights in the United States."

New York City allowed noncitizens to vote in community school board elections until 2003, when the school board system was reorganized, and several municipalities in Massachusetts have approved allowing it but don't yet have the required approval from the Legislature, he said.

I don't believe this is Constitutional.  Just examine the following Amendments:

It is a right of citizens and not residents. 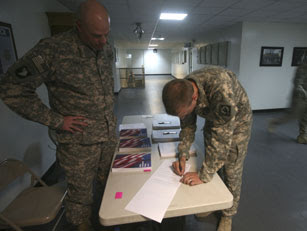 Funny how the liberals want to give away the franchise to any one who just lives here, but is terribly afraid of letting the men and women serving this nation in the military the right to cast a ballot.


Military voters from the land of Lincoln could be shut out of the midterm election after the Justice Department reached an agreement with Illinois that gave the state "a pass" for violating federal election law, an advocacy group warned Monday.

The Justice Department hammered out the court agreement Friday addressing the failure of 35 Illinois counties to send military and overseas absentee ballots 45 days before the election -- a requirement of the MOVE Act. The agreement gave voters from six of those counties a few extra days to send back their ballots but did not specifically address the other 29 counties.

Eric Eversole, a former Justice voting section attorney who runs the nonprofit Military Voter Protection Project, told FoxNews.com the deal effectively lets wayward Illinois
election officials off the hook and does little to ensure the state's military voters get their ballots in time.

"For at least 29 counties, there were absolutely no consequences," he said. "Illinois is precisely the reason why you can't wait until a week before the election to try and resolve a clear violation of military voting rights."

For some overseas military voters, he said, "it might not get there."

Let all non-citizens vote.
Let all military personal be forbidden to vote.
Stuff the ballot box.