We Can 'Defuse' Them 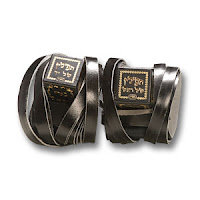 When young Caleb Leibowitz and his sister boarded US Airways flight to Louisville, KY, he didn't have time to say his morning prayers before he boarded his flight, so after take off he pulled out his Tefillin ( 2 small black boxes with black straps attached to them; Jewish men are required to place one box on their head and tie the other one on their arm each weekday morning.), and began to pray. That is when the trouble began.


A US Airways crew panicked by a Jewish teen's prayer ritual aborted a flight from LaGuardia Airport on Thursday, landing in Philadelphia amid unfounded fears of a terrorist bomb.

The frightened boy and his sister, headed for a four-day visit with their grandmother, were instead greeted in the City of Brotherly Love by bomb-sniffing dogs, police and the FBI.

The teen's grandmother said the 7:25 a.m. flight didn't allow time for him to pray before leaving New York.

"He hadn't had the opportunity to pray, so that is why he did it on the plane," said Frances Winchell.

The leather boxes, joined by a strap and known as tefillin, are placed on the head and the left arm. The straps apparently were mistaken for wires running from a box, authorities said.

The flight attendant, unaware of the religious ritual, notified the pilot of a potential problem when the teen put one of the boxes on his head.


I do hope that the Leibowitz family will take US Airways to court over this.  The flight crew over reacted on this. A young JEWISH man wrapping Tefillin around his head and arm, placing a prayer shawl over his shoulders, and praying is not going to harm your flight. 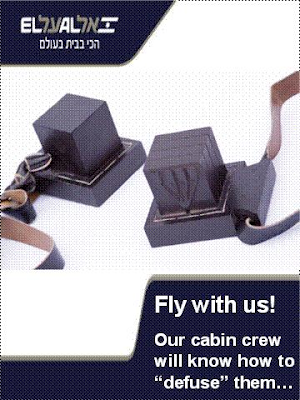 (IsraelNN.com) The ad agency for Israel's national carrier, El Al Airlines, has raced to take advantage of an incident one week ago in which a Jewish teen was taken off a U.S. domestic flight after he began to don a pair of tefillin, or phylacteries.

"Fly with us! Our cabin crew will know how to "defuse" them..." the advertisement for El Al Airlines jocularly proclaims in English, with a full-color photo of the tefillin against a mild blue sky.

The tefillin, a set of small leather boxes that are black in color and contain scrolls of parchment inscribed with Bible verses, worn by Jewish men during weekday morning prayers, apparently ignited suspicions among the cabin crew and passengers on the small domestic U.S. Airways flight that the boy was a would-be suicide bomber.

The plane changed its flight plan and immediately diverted to Philadelphia, where police escorted the 17-year-old “suspect” off the aircraft, which parked in a remote section of the tarmac at Philadelphia International Airport.

It is not really clear whether the “ad” is, in fact, a legitimate ad; AgencySpy editor Matt Van Hoven writes on the Media Bistro creative website that even he has been unable to track down the whereabouts of the elusive “real” advertising agency for El Al Airlines.

“Though this feels fake, it remains awesome,” Van Hoven comments. “Can someone please tell us the origin of this advertisement... If it's really from El Al, it proves the long-standing belief that the Jewish faith is the source of all things awesome in the world, most notably, humor.”


If this is a fake ad, it is well done.  But I have a sneaky suspicion that this is an in house joke.  Either way it brings home the same message:


"We understand security better than you!"