Muslim suicide bombers in Britain are set to begin a three-day strike on Monday in a dispute over the number of virgins they are entitled to in the afterlife. Emergency talks with Al Qaeda management have so far failed to produce an agreement.

The unrest began last Tuesday when Al Qaeda announced that the number of virgins a suicide bomber would receive after his death will be cut by 25% next January from 72 to only 60. The rationale for the cut was the increase in recent years of the number of suicide bombings and a subsequent shortage of virgins in the afterlife.

The suicide bombers' union, the British Organisation of Occupational Martyrs (or B.O.O.M.) responded with a statement that this was unacceptable to its members and immediately balloted for strike action. General secretary Abdullah Amir told the press, "Our members are literally working themselves to death in the cause of jihad. We don't ask for much in return but to be treated like this by management is a kick in the teeth."

Mr Amir accepted the limited availability of virgins but pointed out that the cutbacks were expected to be borne entirely by the workforce and not by management. "Last Christmas Abu Hamza alone was awarded an annual bonus of 250,000 virgins," complains Amir. "And you can be sure they'll all be pretty ones too. How can Al Qaeda afford that for members of the management but not 72 for the people who do the real work?"

Speaking from the shed in the West Midlands where he currently resides, Al Qaeda chief executive Osama bin Laden explained, 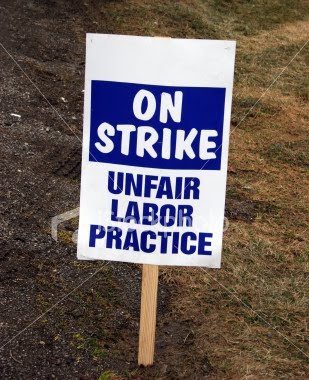 "We sympathise with our workers' concerns but Al Qaeda is simply not in a position to meet their demands. They are simply not accepting the realities of modern-day jihad, in a competitive marketplace. Thanks to Western depravity, there is now a chronic shortage of virgins in the afterlife. It's a straight choice between reducing expenditure and laying people off. I don't like cutting wages but I'd hate to have to tell 3,000 of my staff that they won't be able to blow themselves up." He defended management bonuses by claiming these were necessary to attract good fanatical clerics. "How am I supposed to attract the best people if I can't compete with the private sector?" asked Mr. Bin-Laden.

Talks broke down this morning after management's last-ditch proposal of a virgin-sharing scheme was rejected outright after a failure to agree on orifice allocation quotas. One virgin, who refused to be named, was quoted as saying "I'll be buggered if I'm agreeing to anything like that........it's too much of a mouthful to swallow".

Unless some sort of agreement is reached over the weekend, suicide bombers will down explosives at midday on Monday. Most branches are supporting the strike. Only the North London branch, which has a different union, is likely to continue working. However, some members of that branch will only be using waist-down explosives in order to express solidarity with their striking brethren.

Of course if they keep putting bombs in their underwear, none of this is going to be an issue anyway. ;-)

LMAO! Thanks, I needed that laugh!

This was great, thanks :)K

Many women lose their virginity when they get bombed anyway.