Every one knows that the Israeli National Airline, El Al (Hebrew for To The Skies) has had a perfect security record for the last 30 years.  With a combination of psychology, racial profiling, and armed guards on every flight,  passengers who board an El Al flight can travel without any fear of violence aboard their flight.  No passenger boarding an El Al flight at Ben Gurion Airport has to remove their shoes or belt, liquids are permitted, as is toothpaste, and hand lotion.

On flights into Israel one can use the bathroom until the pilot prepares to land, or read a book, work on your lap top, snuggle under a blanket, or even put some thing in your carry on bag.  How refreshing to see an airline being proactive not reactive.

In the US most security personal are not hired because they actually have experience in security.  They get hired because they have a good credit score.  Forget about a background check.  Murderers, Rapists, Thieves, Pedophiles, Wife Beaters have all been found to be working as airport security personal.  Many without a High School Diploma, let alone a College Degree in Psychology, many cannot speak English, and most have no military experience. So much for protecting the traveling public.  (Israel only hires people who have a very good knowledge of Psychology, who have a clean criminal record, speak at least 2 languages fluently, and have served in the military {preferable an elite unit}.)

Why is it that the US cannot deliver to the flying public 1 ounce of the security that Israel does?  Why is it that the statistics show that since 1965 90% of airline hijackers were Muslim men between the ages of 18 and 50, we still do not play to the percentages and PROFILE those individuals.  Instead we cower to to the voices of Political Correctness.  It is Political Correctness that will bring down an airplane, not the Muslim terrorist who actually does the deed.

Almost 3,000 people died on 9/11 due to Political Correctness.  How many more have to die before we wise up to the reality of Islamic Terrorism? 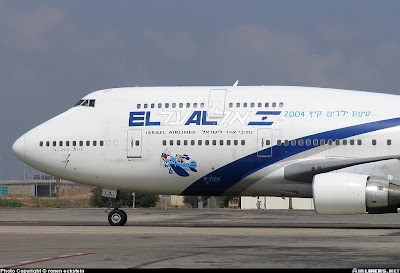 love this post...but Hussein will never behave the way Israelis do..he abhors them!

Over half of America STILL wants their cake and eat it too. They want to coddle the islamists so they don't seem "islamophobic" yet they don't want to pick up the body parts of their family after a plane bombing.

We need to listen to the Israelis and get their help here in the US.

You think HALF, Holger Awakens? I think much less. But even if we are a majority - those of us who would embrace El Air's policies when flying - it is the administration that doesn't care. That portion - the majority, or over half - you have correct. They have a muslim at the helm and do not want to upset any apple carts which might prevent their being able to keep the power they currently have. Thus, it would be "politically incorrect" to offend anyone. Better to inconvenience the entire flying public than to profile.

TSA workers are a joke. A joke! I fly half-way around the world two or three times a year. I dread each trip more and more. You have no idea what it is like to be a white, blonde, hazel-eyed female that gets pulled out of line for secondary screening more often than not. And then sent to secondary questioning at Customs once I reach U.S. soil. I've flown back and forth from Saudi no less than twenty times and I am STILL getting checked...

All this is symptomatic of a society paralysed, helpless and totally beholden to the gods of political correctness.