Getting their panties tied up in a bunch!

Is what will happen after the IDF distributes Korans with this on it: 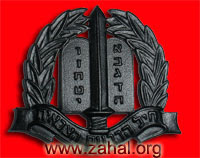 Yes it is true. The IDF will start distributing Korans emblazoned with the Ten Commandments on the cover.

The IDF Rabbinate intends to emboss its emblem on military-issued Korans, according to IDF journal BaMachaneh. This may be the first time in history that an overtly Jewish symbol – the emblem of the Israel Defense Force Rabbinate – will be embossed on Muslim holy books. The Rabbinate’s emblem depicts the Tablets of the Ten Commandments, as well as the sword and olive branches that appear in numerous IDF logos.

The IDF provides Korans for its Muslim soldiers. These include Bedouins, as well as non-Bedouin Muslim Arabs, who have served in the IDF as trackers and in other combat roles since its earliest days.

The idea for embossing the emblem on IDF Korans was brought up by the Chief Jewish Chaplain for the French Army, Maj.-Gen. Rabbi Haim Corsia, who visited the IDF last week. Corsia noticed that the IDF Rabbinate emblem is embossed upon the prayer books that the army hands out to religious Jewish soldiers, but does not appear on military Korans.

Rabbi Corsia pointed out the matter to the IDF’s Chief Rabbi, Brig.-Gen. Avichai Ronsky, who promised to fix the situation, the military magazine reported.

“Not having the Military Rabbinate’s emblem on the Koran is a mistake," Rabbi Corsia said. “If the IDF issues Korans to Muslim soldiers, that means the Koran is part of the army. I look at the Book of Tehillim (Psalms) and it has the stamp, but the Koran does not. In the French army this would not happen. This is an area in which we can help the IDF."

I wonder how long it will take the Muslim world to rise up in indignation over this outrage. Could you imagine what a group like CAIR would be saying if the US military did a stunt like this.

Yet the Chaplains have a good reason. It is their insignia, and they are the group distributing the Korans.

Still I expect some cleric, some where in the world will stir up trouble about this.

It will be fun to watch though.
Posted by Findalis at 9:00 AM

You will remember that the US military in Afghanistan had Bibles translated in the local languages and were passing them out. All hell broke lose, the US confiscated the Bibles and burned them. At least that is what I remember a while back.

You're right, CAIR would scream bloody murder - imagine what they would do if my suggestion was acted upon and the tattoo of "TERRORIST" was emblazened on every CAIR leader's forehead.

Let them start up about it, it'll be one more example of muslims whining like stuck pigs about how they are non-violent and being violent about it. Perhaps this time the world will pull its head of its ass. I'm not holding my breath for it though.

While some people NOT in the IDF might yell and scream about this, I don't think the soldiers receiving the Quran will make a big deal out of it at all. They are, after all, already IDF soldiers...

Fortunately, there are heroes in IDF who removed so called New Testaments from an IDF Beth Midrash.

I wonder what will happen to these Qurans?