"The U.S. insists that Muslims are the primary victims of Boko Haram... The question remains -- why is the U.S. downplaying or denying the attacks against Christians?" — Emmanuel Ogebe, Nigerian human rights lawyer, Washington D.C"


As Islamic persecution of Christians continues to rage world-wide, our clueless administration continues to ignore it. Our State Department tries to keep Christians from even visiting the US to testify about what is happening. In the below piece for the Gatestone Institute, Raymond Ibrahim describes how our State Department is hostile to Christian concerns for fear of offending the Islamic world.

"Sister Diana, an influential Iraqi Christian leader, who was scheduled to visit the U.S. to advocate for persecuted Christians in the Mideast, was denied a visa by the U.S. State Department even though she had visited the U.S. before, most recently in 2012."

Meanwhile, the administration is in the process of relocating some 65,000 Syrians to the US. And we just cross-posted that story about a DHS bus full of Somalis being taken from the Mexican border to a detention center.

And speaking of Jeh Johnson, the empty suit head of DHS, this is the guy who just recently was asked by a Congressional Committee if anyone in the administration had reached out to the Steinle family, to which he said, "To who?" He had no idea who the young lady (Kate Steinle) was or at least he didn't know the name of the victim of the murder  in San Francisco at the hands of an illegal alien career criminal who should not have been on the streets to begin with. It was the biggest DHS-related issue on that day, and he didn't even know the name of the victim. After it was explained to him, he said that he didn't know if the family had been contacted. (They hadn't.)

But it gets worse with this boob. This week, he was captured on video explaining why DHS and the administration are not supposed to use the term Islamic terror when talking about ISIS or all the other Islamic terror groups.

It is because (according to Johnson) we need to reach out to the Muslim community and assure them that all this has nothing to do with Islam (hat tip Inquisitr).

“I think it’s critical that in order to build our relationships and build our level of cooperation with the Islamic communities here, we have to say to them ‘Look, we understand that what this depraved terrorist organization is doing is no part of your religion.'”

If I may ask Mr Johnson a rather convoluted question: If all this terror emanating from ISIS, al Qaeda, al Shabaab, Hamas, Hezbollah, and all the others has nothing to do with Islam, what trust or cooperation is needed? Why do you need to reach out to the Muslim community? 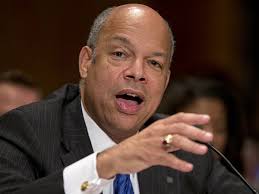 This boob, like his predecessor, Janet Napolitano, is clearly not up to the job. We are already paying the cost in American lives from Boston to Chattanooga to the US-Mexican border. And make no mistake: There are more to come.