They Are Going To Kill Obama!

And Guess Who The They Is?

Louis Farrakhan told his Nation of Islam Cult that the Jews will kill Obama, destroy their cult, and want to take over the world. 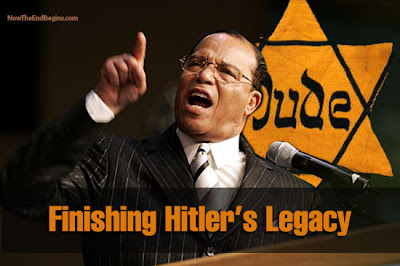 In a fiery lecture to thousands of followers of the Nation of Islam on Sunday in Chicago, Minister Louis Farrakhan warned that racial hatred could lead to attempts to assassinate President Barack Obama.

Farrakhan spent much of his oration decrying what he cast as Satan's influence over racist forces in politics and society before asking a pointed rhetorical question: "Do you think they're wicked enough to be plotting our brother's assassination as we speak?"

Farrakhan delivered his speech to an enthusiastic crowd of adherents packed loosely into the United Center for the Nation of Islam's annual observance of Saviours' Day, which celebrates the birth of the faith's founder, W. Fard Muhammad. This year's events marked the 82nd year of the religion's existence in North America.

With his finger jabbing at the air above him and his voice frequently raising to an indignant shout, Farrakhan, 78, delivered his message to a crowd of men in dark suits with bow ties and women in shimmering white gowns and scarves.

He spoke for more than three hours on a broad array of topics, excoriating U.S. foreign policy, suggesting that the9/11attacks were a government-planned pretext for war in the Middle East, lamenting recent extreme weather and attacking mothers for serving their children food from McDonald's. He also returned repeatedly to a topic that has attracted intense controversy in the past: the influence of Jews in politics and media.

Farrakhan drew a distinction between noble Jews and followers of "the synagogue of Satan," and he pointed to a recent incident in which the publisher of a Jewish magazine suggested Israeli security forces could help preserve Israel by killing Obama. He attacked Israeli policies, while also directing criticism at perceived Jewish influence in the U.S.

"Jewish people were not the origin of Hollywood, but they took it over," he said, blaming the entertainment industry for degrading the country's morality.

While Farrakhan called out conservatives for questioning Obama's citizenship and even criticizing the figure of first lady Michelle Obama, he also attacked the president for his support of efforts to remove Middle Eastern leaders and warned him against any potential military action in Iran. The crowd roared as he called on them to be "conscientious objectors" to any strike against Iran.

He again condemned the killing of Libyan leader Moammar Gadhafi. Farrakhan was friends with the slain dictator, and the Nation of Islam's headquarters was purchased 40 years ago with a $3 million loan from Gadhafi.

Farrakhan also suggested that Osama bin Laden was killed by U.S. forces, instead of being detained for questioning, because the government might not have been able to prove all its accusations against him.

On domestic policy, Farrakhan said the national debt has reached unsustainable levels, and he challenged Obama's assertion in his recent State of the Union speech that the country is not in decline.

"America is on her deathbed. The vital signs of America are not good," he said.

As he spoke, Farrakhan was flanked by dozens of associates and dignitaries, including another controversial religious figure based in Chicago: the Rev. Michael Pfleger, who stood to receive praise from Farrakhan and applause from the crowd.

Near the close of his speech, Farrakhan spent several minutes comparing Obama's political situation to that of Abraham Lincoln, who was assassinated after winning a second term, and suggested an assassination plot against Obama might involve a "patsy," a person set up to take the blame for a broader conspiracy.

"I believe they want a Muslim to kill President Obama," he said.

Louis Farrakhan sided for years with Gadhafi, Arafat, Saddam Hussein, Mahmoud Ahmadinejad, and any other dictator that speaks out against the United States, Jews, Israel or all three.

How much longer will the clown Farrakhan be allowed to speak his words of hatred unchallenged?
Posted by Findalis at 8:00 AM

snap shot of farrakahn at berkeley in his true satanic image: http://proisraelctu.blogspot.com/2012/03/louise-filthy-jew-hating-farrakahn-at.html