Mosque of the Nativity? 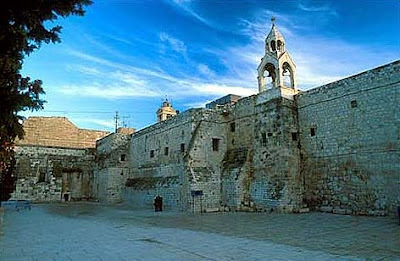 A friend of mine recently returned from a trip to Israel. While visiting Bethlehem and the Church of the Nativity he heard a most disturbing rumor:

With the Christians moving out of Bethlehem and the town being more than 80% Muslim, the Palestinian Authority is considering tearing down the Church of the Nativity and building a mosque on the site.

If this is true, it would be one of the worst crimes against religion since the Taliban destroyed the Bamiyan Buddhas.

Since the Palestinian Authority's take over of Bethlehem in 2006, the Christian population has gone from 85% to just a bit over 12%. The Church of the Nativity is mainly empty as is their collection boxes. And a feeling of fear fills the remaining Christians. Tour buses enter Bethlehem, the tourists go to the Church, then the buses leave. Once a Christian pilgrim would spend at least a day in Bethlehem, now the same pilgrim spends as little time as possible. An atmosphere of fear permeates the town.

This wasn't always so. Under Israeli control, Bethlehem and the Christians living there thrived. But since 2006 and the PA take over of the town Christians have been persecuted and forced to move out of the West Bank.

Palestinian Muslims have no respect for any holy site other than their own.

On April 2, 2002 armed Palestinian Arab terrorists forced their way into the Church of the Nativity in Bethlehem, one of Christianity's most sacred sites, the birthplace of Christ. In the midst of over 200 nuns and priests, they sought refuge from Operation Defensive Shield, the Israel Defense Forces action against suicide bombing activity originating from West Bank locations. For 38 days, until May 10, 2002, the world watched as the gunmen refused to surrender their positions inside the Church. Only Israeli restraint and respect for the Christian shrine prevented the Palestinian desecration from turning into its destruction.

But they did desecrate one of the most holiest sites in Christendom. Stealing or destroying virtually everything of value inside the building. And the world let them get away with it.

I expected at least the Vatican to protest not only the 38 day siege, but also the destruction of the holy site. But not a sign from them, or any other Christian group.

This emboldens the Muslims. They know they can get away with anything against non-Muslims and the world will say nothing. So maybe the rumor isn't just a rumor and just a statement of what will happen.

And the Church of the Nativity will go the same route of the Bamiyan Buddhas. Destroyed and a new mosque built in the place.

it doesnt surprise me in the least..wake up the world my friend..they are comatose!! :)

Those who were silent in our darkest hours must now speak up for themselves. This is a recurrent theme as the Tsunami of mutant Islam sweeps the birthplace of Judaism and Christianity and tries to get the landscape itself to parrot their lies. We try to forget the lessons of history and are rewarded with a rude awakening
Magdeburger Joe of magdeburgerjoe.com

The reason for the large exodus of Christians from Bethlehem is because the Israeli separation barrier stops commerce and few can support their families as before 2006. Permits to work in nearby Jerusalem (a united city, remember?) are not easy to get and must be renewed frequently and must be issued by Israelis.
There already is a mosque directly opposite the church of the nativity. Muslims respect Christians as"People of the Book"
This has all the hallmarks of a racist rumor.

Sorry Bee but there you are wrong. There were massive road blocks before the PA took control of Bethlehem, yet the Christian Population thrived.

It was only after the PA took control of the city was there a systematic and deliberate effort to remove Christians from the West Bank and Gaza. This is still going on today with Hamas and the attacks on Christians in Gaza.

Muslims do not respect Christians, they tolerate them. As by the actions of Muslims in Egypt, Nigeria, Indonesia, the Philippines, Iran, Iraq and other Muslim nations. Christians are second-class citizens at best, subject to rape, torture and murder at the hands if their Muslim masters. It is legal in Muslim nations to enslave a Christian.

Or look at Saudi Arabia where a Christian cannot worship G-d openly, own a bible, or build a church.

You Izzy need to open your eyes and see the truth.