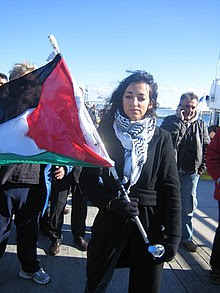 Last night, International Solidarity Movement co-founder Huwaida Araff spoke at San Diego State University as part of a program hosted by the Charles W Hostler Institute on World Affairs. The moderator was Professor Jonathan Graubart of the above organization. The event was attended by above 70 people almost all students, many of whom were Graubart's students were attending as part of a class assignment. Also present was Adam Shapiro, Araff's husband and also co-founder of ISM. In his introduction, Graubart said, "it was regrettable that a few outside groups had made some ungenerous comments about the lecture series and myself". The event lasted about two hours.

In her presentation, Araff told of her birth and upbringing in America (Her parents were Palestinians from Israel), her education, and her travel to Jerusalem, where she was to remain for a year working for an organization called Seeds of Peace.  She became a Palestinian activist working against Israeli "occupation" and stayed beyond the year after resigning from the above organization. She recounted the First Intifada (1991-93), the Second Intifada that began in 2000 when Ariel Sharon visited the Temple Mount, and the creation of the International Solidarity Movement. (I may have missed it, but in her presentation-in-chief, I don't recall hearing her actually refer to the ISM by name.)

She then went on to describe efforts to bring in "internationals" to participate in protests against roadblocks and checkpoints etc. She stated that it was their reasoning that Israeli soldiers would be reluctant to use force against people who did not look like Palestinians.

Needless to say, her talk was long on Israeli injustices and violence on Palestinians and short on any Palestinian transgressions over the years including hijackings, the Munich Olympic massacre, bus bombings,  other suicide bombings, or rocket attacks from Gaza into Israel. The Intifadas, which she experienced, was basically characterized as resistance and rock-throwing against Israeli tanks and bullets. Rachel Corrie's death (2003) was also mentioned. (According to Araff's account, Corrie was trying to convince the bulldozer driver not to demolish a house and the driver ran over her). She also referred to Yasser Arafat as "Chairman Yasser Arafat" in obvious respect.

In the q and a, I got the first question (beginning of part 4) and asked her about her reported comment to a  Duke University audience (2004) that the ISM cooperated with Hamas, Islamic Jihad, and the Popular Front for the Liberation of Palestine, which are State Department-recognized terrorist organizations. I also asked her to comment on the reports that two British suicide bombers who attacked Mike's Bar in Tel Aviv in 2003 had stayed at an ISM facility prior to crossing over into Israel.

(Note: I am paraphrasing Araff's response. Refer to video for her exact words.)

In her response, she said that what she told the Duke audience was that while ISM's tactics were non-violent, she could not tell others not to employ armed resistance. She said that she considered attacks against unarmed civilians as illegal, but that there were rules of war that governed resistance to armed occupation. She said ISM would not reject someone joining them because they had connections to those organizations, but that she would explain that ISM rules dictated non-violent actions. She did not address my question about the above three organizations. As for the event at Mike's Bar, she said that when she received the news, she decided to call a press conference and inform the press that the two had been at an ISM facility. According to Araff, the two had shown up in Gaza and asked to visit. She said they came by the ISM house, had tea and left. According to Araff, the ISM had no idea of their intent to launch an attack. In a  followup question, I asked her pointedly if ISM had any connections to Hamas. She replied in the negative ("No".) She explained that ISM preferred to be independent and not be a part of any "political factions" because if they were aligned with one group, another group might not want to work with them as a result. (Again I am paraphrasing.) Interestingly, she never said anything close to, "We would never associate with Hamas because they are terrorists or  designated as a terrorist organization by the US State Department.") There was absolutely nothing critical said about Hamas. She referred to Hamas, Islamic Jihad, and the Popular Front for Palestine merely as "political factions".

Below is the video in 5 parts. At one point, there is about a 20-second gap when I had to change the memory card in my video camera.