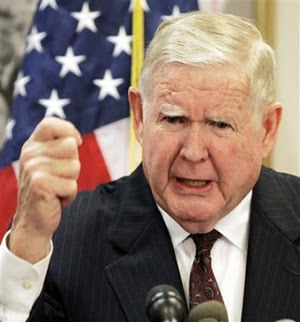 Murtha was an mystery at times. Pro-life, anti-gun control, against NAFTA and CAFTA, Murtha seem more like a Republican than a Democrat.  Yet he voted for the stimulus package, and health care bills.  He also was in favor of Cap and Trade.

What John Murtha is best remembered for is the corruption that has been associated with him.


Murtha has been targeted by Citizens for Responsibility and Ethics in Washington as one of the 20 most corrupt members of Congress.

In September 2006 the Citizens for Responsibility and Ethics in Washington (CREW) listed Murtha under Five Members to Watch in its Second Annual Most Corrupt Members of Congress Report. The report cited Murtha's steering of defense appropriations to clients of KSA Consulting, which employed his brother Robert, and the PMA Group, founded by Paul Magliocchetti, a former senior staffer on the Appropriations Committee Subcommittee on Defense.

In 2008, Esquire Magazine named him one of the 10 worst members of Congress because of his opposition to ethics reform and the $100 million a year he brings in earmarks to his district.The Wall Street Journal has called him "one of Congress's most unapologetic earmarkers."  According to the Pennsylvania Report, Murtha is one of "Pennsylvania’s most powerful congressman" and a "master of crossing the aisle and bringing pork into his district."

In February 2009, CQ Politics reported that Murtha was one of 104 U.S. representatives to earmark funds in the 2008 Defense appropriations spending bill for a lobbying group that had contributed to his past election campaigns. The spending bill, which was managed by Murtha in his capacity as Chairman of the House Appropriations Subcommittee on Defense, secured $38.1 million for clients of the PMA Group in the single fiscal law. The PMA Group is currently under investigation by the FBI.

In March 2009, the Washington Post reported that a Pennsylvania defense research center regularly consulted with two "handlers" close to Murtha while it received nearly $250 million in federal funding via Murtha's earmarks. The center then channeled a significant portion of the funding to companies that were among Murtha's campaign supporters.

Then there was the infamous Haditha killings.


The Haditha incident occurred on 19 November, 2005, and since then there have been differing accounts of exactly what took place.

In November 2005 Murtha announced that a military investigation into the Haditha killings concluded U.S. Marines had intentionally killed innocent civilians. Referring to the first report about Haditha that appeared in Time magazine, Murtha said:

"It's much worse than reported in Time magazine. There was no fire fight. There was no IED that killed these innocent people. Our troops overreacted because of the pressure on them and they killed innocent civilians in cold blood. And that's what the report is going to tell."

The Marine Corps responded to Murtha's announcement by stating that "there is an ongoing investigation; therefore, any comment at this time would be inappropriate and could undermine the investigatory and possible legal process." Murtha was criticized by conservatives for presenting a version of events as simple fact before an official investigation had been concluded.

In August 2006, Staff Sgt. Frank Wuterich filed a lawsuit against Murtha for character defamation during an ongoing investigation into the Haditha incident. In April 2009 this suit was dismissed by a federal appeals court, while ruled that Murtha could not be sued because he was acting in his official role as a lawmaker when he made the statements.

On December 21, 2006, the US military charged Wuterich with 12 counts of unpremeditated murder against individuals and one count of the murder of six people "while engaged in an act inherently dangerous to others". Charges were subsequently dropped against seven of the eight Marines involved: Capt. Lucas McConnell, Lt. Col. Jeffrey Chessani, Sgt. Sanick Dela Cruz, Lance Corporal Stephen Tatum, Lance Cpl. Justin Sharratt, Capt. Randy Stone and 1st Lt. Andrew Grayson. Only Sergeant Frank Wuterich is still facing trial on 9 counts of involuntary manslaughter.

A interview with Murtha on the subject is on record

Oh yes, he was up for re-election.  A re-election that was not a slam-dunk.

Gone now is the King of Pork, Defamer of Marines, Traitor to the Nation.  I wonder who will be taking his place, and how much will this one spend to keep the Murtha legend alive?
Posted by Findalis at 3:27 PM

Good piece on a poor subject.

The Haditha incident is what Murtha will be remembered forever for - it's inconceivable that a U.S. Marine could literally turn on his own. Semper Fi meant NOTHING to this man.

I'll leave it at that.

I am refusing to post any of my own comments on this EX-Marine, but have linked to This Ain't Hell. Will add a link to yours...

John Murtha died of a botched surgery. Is this the kind of health care he planned to deliver to us? No thanks!