During an outdoor student-on-campus event, the University of Hawaii forced, or tried to force, students Anthony Vizzone and Merritt Burch, to stand in an area referred to as a "free speech zone" while handing out free copies of the U.S. Constitution. The University of Hawaii is a public university. Read about the lawsuit, and the young men involved, below. 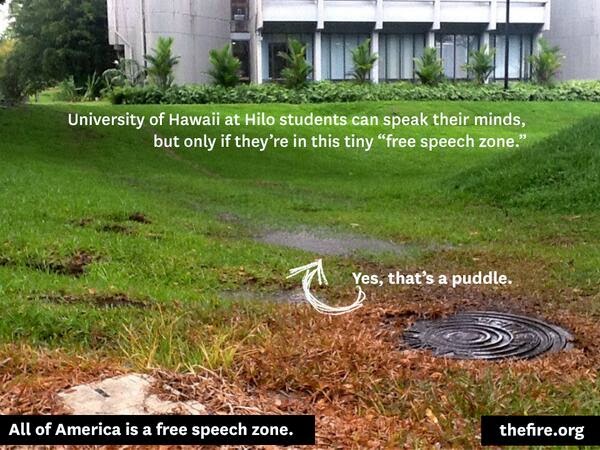 
“The First Amendment is not optional at public colleges, it’s the law. Enforcing restrictive free speech zone policies that prevent students from passing out copies of the Constitution is impossible to justify.” Greg Lukianoff, Foundation for Individual Rights in Education (FIRE)

In the early days of the Bureau of Land Manangement's (BLM) assault on Cliven Bundy's cattle, the BLM tried to herd Bundy supporters into a small cordoned-off area the BLM designated a "First Amendment Area," complete with a sign paid for by taxpayers.


Anthony Vizzone and Merritt Burch are members of the University of Hawaii chapter of Young Americans for Liberty. The pair of young men filed a First Amendment infringement lawsuit over the matter in federal court on Thursday. The college students contend that school administrators violated their constitutional free speech rights during an outdoor student event held on the campus in January. Student groups were reportedly permitted to set up information tables and distribute literature during the gathering. The Young Americans for Liberty members are being represented by Davis Wright Termaine, the same attorneys who represented a Modesto Junior College student who was also prohibited from handing out copies of the Constitution. The California college student won a $50,000 settlement against the school. Source: Inquisitr