How the Gaza Tunnels into Egypt Work

Cross-posted by Maggie at Maggie's Notebook 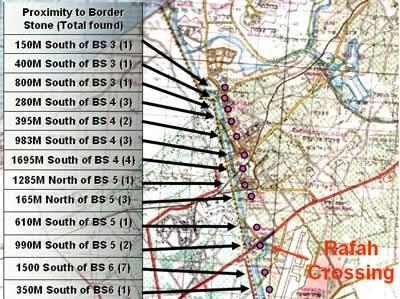 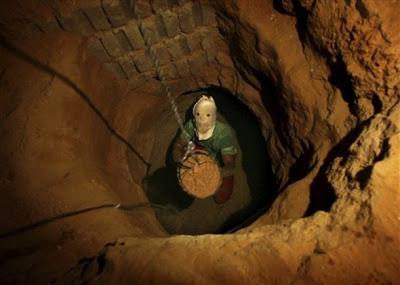 A tunnel underneath Rafah. At the end of October 2007, the Israeli military said 70 tons of explosives have been smuggled into Gaza through the tunnels since the Gaza takeover.

I have wondered about the tunnels underneath Gaza into Egypt. How do they work? How could they work? The Telegraph tells us how it goes down in Gaza's Tunnel City:

...deep beneath the watchtowers and fences of Gaza's 10-mile long border with Egypt, a sprawling warren of hand-dug burrows now supplies everything from food, petrol and designer jeans through to guns, drugs and black market Marlboro cigarettes. Tunnel gangs charge premiums of up to 150 per cent on their cargos, raking in tens of thousands of dollars a week and making the excavation business one of Gaza's few growth industries.

"We bring through laptops, clothes, computers, medicines, mobile phones and even people," said Hisham al Loukh, 23, another tunneller. "There was even a bride from Egypt who came through one recently to get married to a man in Gaza."

The first tunnels underneath Gaza's perimeters were dug years ago, when they were they were primarily to smuggle weapons and explosives for use against Israel. But it is during the blockade of the past year that the tunnellers' hazardous craft has really come to the fore. On some estimates there are now up to 500 passageways across to Egypt, mostly clustered around the town of Rafah, which straddles the border.

The tunnels usually surface in the gardens of villas on the Egyptian side of Rafah, where many residents are either sympathetic to the Palestinian cause or willing to lend their properties in return for a share of the lucrative profits.

Each member of a tunnelling gangs, usually working in day and night shifts of 10 men each, earns around $15 per metre of passageway dug, which counts as a decent wage in an area which currently has 80 per cent unemployment. But as even the briefest of sojourns down into one of the tunnels makes clear, it is a risky living.

Entering one requires perching precariously on a makeshift wooden chairlift, which is then lowered down the 30 foot deep shaft by a winch powered by a sputtering petrol generator. As in the Second World War film classic The Great Escape, the tunnel's walls are propped up with makeshift wooden planks, and equipped with ventilation pumps to freshen the musty, damp air at the bottom. Diggers then use small electric drills to carve a path through the thick clay soil, steering their way by hand-held compass.

The media, today, focuses on Israel's closed-border policy during the last cease fire as the catalyst for the tunnel runs - and the cause of a dire humanitarian crisis. Israel say the borders were closed to turn public opinion in Gaza against Hamas.

The speaker in The Telegraph report is a 22 year old male who says he must tunnel to feed his family. When the tunnels cave in, which he says happens often, he holds his breath, waits and so far has made it to safety, but deaths and injuries are not infrequent.

There are also rumours that Hamas rakes in millions of dollars by imposing an unofficial "tax" on all tunnelled goods, although Dr Ahmed Yousef, a senior advisor in Hamas's foreign ministry, denies such claims.

Israel has insisted that if the terrorism against Israel would stop, Gaza borders would remain open.

Tunnel entrepreneurs are now enjoying such good business, however, that they now have a vested interest in the status quo. In recent months a ceasefire between Hamas and Israel has raised hopes that the economic blockade might be eased, but some in Gaza fear that should that ever look like happening, local tunnel owners will sabotage it by paying militants to fire rockets into Israel again.

Posted by Maggie Thornton at 12:14 PM

Great article and the pictures and map are excellent. Egypt wants to be the peace-maker in this Israeli-Gaza war, but I think they have a lot to answer for.

And I thought cigarette smugglers in Georgia had this stuff down pat!